Beyond intersection, towards union 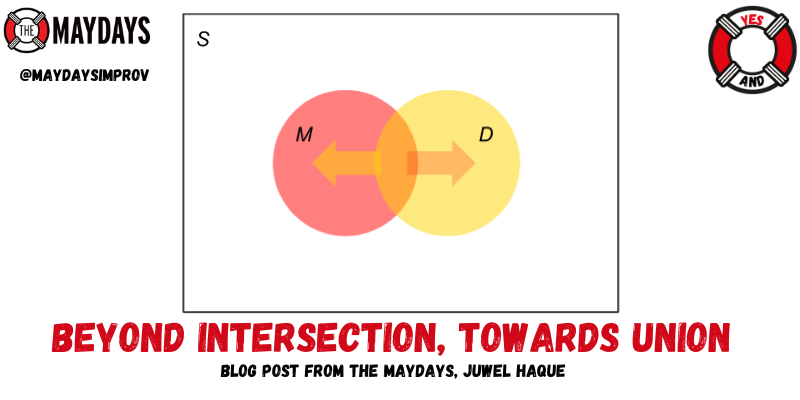 Mochi is a person who has lived a life up to now. In that life, he has had experiences, thoughts and feelings. Gained relationships, knowledge, technical capabilities, physicality, a philosophy and values. Consumed media, food, drink and travel. All this and more, provide Mochi with a personal pool of inspiration that informs his improvisation, whether deliberately or unconsciously. The same is true for Dango.

Usually, improv is a team sport, so an improv team can benefit from the inspiration of each member.

Now for some notation from set theory, a branch of mathematics.

The symbol ?, is called “cap”, and is used to denote the intersection between two sets. So M ? D (read “M intersection D” or “M cap D” or “M and D”) is everything that belongs in both M and D, and nothing that doesn’t. That is, the orange bit in Fig. 2.

For example, let’s say that Mochi and Dango are from the same hometown. That’s something they have in common, so it would be in M ? D, the orange bit of Fig. 2. When either of them refers to their hometown in a performance of their duo show, the other already knows a whole lot about that, and they can both confidently play with that concept and explore it more fully.

On the other hand, let’s say that Mochi is an avid Star Wars fan, and Dango hasn’t seen any of the films, and may know through osmosis that Darth Vader is Luke’s father, and not much more than that. So some amount of Star Wars knowledge will be in orange, but more of it will be in red. If Mochi refers to Star Wars in their duo act, Dango might feel unconfident in playing with that. He might gamely give it a go, or he might steer the scene towards something else, with which Dango would feel more comfortable.

In theory, we’d be able to enlist the full amount of inspiration we and our teammates have in our improv show. In practice, we tend to play with just what we have in common. We might call this group mind. We encourage this tendency. We try and “get on the same page”. We form troupes around shared improv training and technique and vocabulary, such as a Harold team, or around shared knowledge and interest, such as a genre-narrative show (signposting The Maydays’ own Happily Never After, which you should see, it’s a good show). We form teams with our friends, or the sort of people that look and sound like us, the sort of people we might have gone to school with, the sort of people that we “could have a drink with”.

I don’t think this tendency is wrong, despite how I’m about to talk about it. I do think it can be limiting, and it can mean we have less interesting shows than we’re capable of. I like improv shows that are interesting. I think it can make improvisers feel as though certain aspects of their being and experience are unwelcome in the improv context of their lives. I like improvisers to feel entirely welcome.

So how can we do scenes and shows that go beyond the intersection of our teams, and gain access to the richer and wider collective pool of the team’s union? How can we confidently offer up characters and scene detail that borrow from those parts of us that our teammates’ don’t know well; and how can we confidently receive those kinds of offerings from our teammates? How do we get comfortable playing with our complement, and how do we make that comfortable for others?

Mochi has real and good reasons for being wary of making offers from his personal experience that Dango may not know much about. He doesn’t want to put Dango in a position of insecurity; and he also risks rejection, a scenic response from Dango that amounts to “I don’t know what that is, let’s make the scene about something else”. So, from where does Mochi gain the courage to make that leap of faith? I’ve got a few suggestions for him:

Mochi might also be apprehensive about receiving offers from Dango that he doesn’t know what to do with. What if he gets relevant details wrong, or causes harm through ignorance?

The more improv we do, whether with the same people or those who are not like us, the more comfortable we’ll get with playing beyond our own strengths and experience, and in holding space for our scene partners. The way to union with your teammates is to share yourselves, share experiences, and learn each other.

If you liked that, here’s something else from me: We’re better than that: On self-deprecating humour.

And here are my sister’s cats, Mochi and Dango, after whom the protagonists of this piece are named.