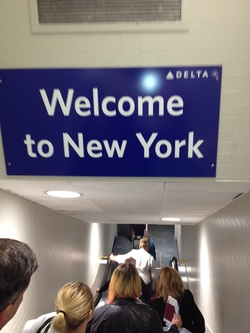 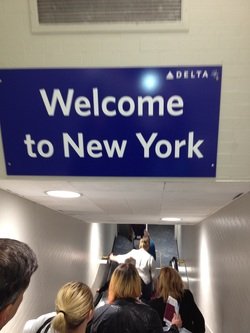 It appears that improv pilgrimages start with a bacon and cheese baguette. I begin writing not on the plane or in the shadow of the Empire State Building or surrounded by new Converse trainers but on a 7:44 Gatwick Express service to Victoria. I’m travelling at about a mile an hour.

in these inauspicious circumstances begins a 6-week, stateside adventure taking in New York, Chicago and, well, New York again. You can’t accuse me of not considering the narrative bookend of the whole affair. I’m hoping to document my time in America in the journal I’m carrying around with me, this blog, on twitter (@jblackwater and #ChicaGoUK) and probably Facebook too, I’m like that, as a way of remembering and passing on the little nuggets of genius I come across and also raise a few smiles in, and not because of, my absence. You never know, If I can get YouTube to accept I’m not 6 days old again, I might even do an occasional video blog to go with it all.

While I’m in Chicago (Sunday 8th July to Sunday 11th August) I’m going to be staying here. It’s a meditation centre. We hold our improv residential in a similar kind of place in Dorset. It seems weird from the outside but in general it’s pretty cool and everyone leaves you be. The reason I mention it now, is because I’ve not been given a lot of details and it’s been left pretty open as to whether or not I’m supposed to be…er…one of “them”…while I’m there. so in order to prepare and to kill some time in Heathrow I started my shortlist of Sanskrit names (“they” all get given one). Here’s the 12-name shortlist:

Now, what? Pret A Manger? done.