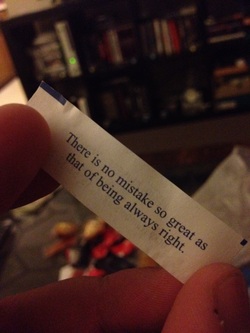 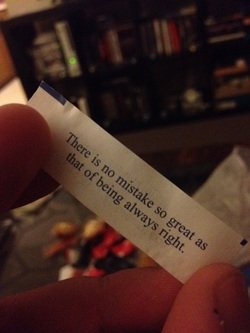 by Jason Blackwater4/7/12
New York CityOK. I’ve not spoken about Chicago much and that’s mainly because I’m not there yet. I will be there. But I’m not yet. I’m going to be there on Sunday. So now we’ve got that cleared up.

I know a guy who lives in New York. A Greek/Brit who I went to drama school with is putting up with me…putting me up…for a few days because flights to New York, with an additional train to Chicago, are cheaper than flying direct. Also I get to see a lot more of the country and get to see some fireworks. It is independence day for Pete’s sake and we all have reason to celebrate there!

The plan was brilliant in its simplicity. Touch down at 4:15, meet at 5 at Jamaica Station, go to his, drop my bags, go get a drink near Central Park and watch the fireworks from the greenery once the sun was down. Couldn’t be simpler. Except that at 5pm I was still queuing at immigration. I also had no idea it was going to be hotter than the core of the earth. My iPhone weather app has a lot to answer for! If you’re still to arrive, put some shorts in your hand luggage (relevant tip, if a little un-Chicago oriented). By 8pm, showered and changed, we were heading out, at an elevated pace, towards the subway.

We eventually end up, around 9:30 (half hour beyond predicted start time for fireworks) not in central park because, as rather sensibly pointed out by my buddy’s girlfriend, you won’t be able to see anything from there, what with the trees and buildings and whatnot. We head, instead for the Hudson, we do pretty well, reaching a spot “only” 40 blocks away from the action and on a grass verge on the side of the highway. 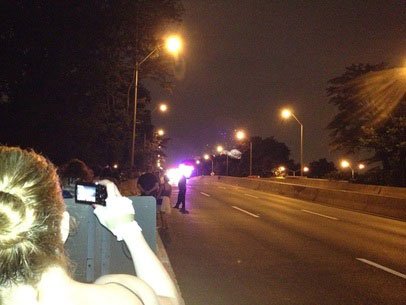 The fireworks, as can be clearly seen just to the right of the centre of this picture (between the lamp posts. The really bright lights to the left of centre are the blues of a pair of cop cars making photography difficult.), were beautiful. Well, the top third of every fifth firework launched during the final 5 minutes of the display was beautiful so one can only assume the others were probably the same.The evening’s entertainment, which also included a driver having his tyres blown out by police trailing spikes, came to an abrupt end and we went in search of a bar, one of those amazing american bars that are propped up by guys whose wives have just left them and have just asked the bartender to “leave the bottle” of whatever strong bourbon they’ve just been poured. And so it was we ended up in an Irish bar, drinking lifeless budweiser off the tap and not feeling great as my twenty fourth hour awake suddenly caught up with me. I was ready for bed.

To a diner! A cheeseburger later and I was truly out for the count, facing my first solo trip on the New York Subway system.

My previous experience of this had come on the JFK Airtrain, a highly confusing system of DLR-style trains that seem to say “here are your potential destinations…good luck” without offering any kind of suggestion of how how you might reach them. This time, though, I had directions and clear instructions of what I should do and where I should go. Thank god they were wrong! after waiting for subway train number 1 for 30 minutes, watching tutting commuters coming and going and thinking to myself “impatiant! imagine only giving a train at this time of night a couple of minutes before giving up. you’ve clearly never been to London!”, and falling asleep more frequently than I would have liked, I decided to investigate. Wrong platform. late night trains go from somewhere else if they go at all. If I’d have founds the right platform straight off, however, I’d have fallen asleep on the train and ended up in Brooklyn at 3am and that would not have ended well. I adjusted my plan and got home in one piece.

I’ve been promised a tour of Manhattan tomorrow so time for bed, for real this time. More to come.