Getting out of the improv dip – Part 2

As part of a series of blogs on overcoming that moment where you feel you’ve lost your improv mojo, I’ve written to a number of improv greats from around the world asking their advice. How have they overcome moments when they felt bad about their improv? How do they up their game? The second in my series is the incomparable Scott Adsit … 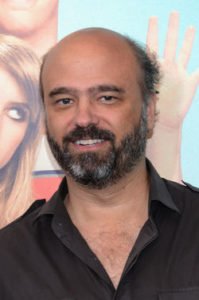 Scott Adsit performed on the Second City mainstage from 1994 – 1998 alongside Tina Fey and Rachel Dratch.  He is best known for playing the role of Pete Hornberger in the TV show 30 Rock, has also had roles in the US version of The Office and Friends as well as being the voice of the huggable robot Baymax in the Disney animated movie Big Hero 6.  His perspective on the improv dip is devastatingly familiar but his advice is heartening.

‘The Dip for me usually comes from my willful dismissal of the things I learned in my first improv class with Martin DeMaat. The basic things about making your partner look good and that her idea is always better than yours. That’s when I find myself, after a show, wondering if my best nights are behind me and realizing that any good shows I’ve had in the past were flukes, like Buster Keaton not getting killed by that house falling on him. While that’s not the case, when in the Dip, surviving a show is the victory.

Until recently, I would beat myself up for a solid week after making the obvious mistakes and selfish choices in a bad show. Nowadays, I can let it go after a very brief 72 hours or so. I know I’m a fraud. Until the next show when I feel good with it. It’s a self-loathing yo-yo diet of doubt and satisfaction.

When you’re performing and you feel the slow, yawning chasm of a dead scene that you can’t get out of, you have two choices. 1. Ride out the doldrums and hope for a resolution that satisfies your artistic standards; 2. Get out now, before they notice the stink. Number 1 is generally what I end up doing because I trust my partner and I to find the nice scenic dessert that will make the crowd forget the broccoli we’ve been shoving in their throats. And I’m sadomasochistically indulgent that way.

But that works for me only half the time. The failing half means I’ve waited too long for Number 2 to be effective and we slink out of the scene as if the patient just died. So, always go right to Number 2? No. Neither is the correct option. Dig a hole deeper and it’s harder to get out. Be impatient and you may miss out on something potentially magical.

So, is it your fault if you choose the wrong option in a given situation? Of course not. Everything is potential with improv. The thing you have to do when you feel you’ve failed is get to that next show. Get on stage and get your success ratio back on track. The more you do it, the better, more instinctive you become.

When you feel like you’re not good at it, get on stage twice as many nights as usual. And then beat yourself up for sucking. But also, listen to your own notes. You know why it was bad. Take the notes. Only the helpful ones, of course. If your inner director is telling you that you suck roach nipples, try to be a little more constructive.

You have the answers already as long as you don’t crush your own spirit. It’s like what Martin DeMaat told me all those years ago, ‘It’s not how far you fall, it’s how gracefully you land.”