Happily Never After by The Maydays at Ed Fringe 19

From next week, we’ll be performing our Show Happily Never after at the Edinburgh Fringe. We did some cast interviews ahead of the festival to find out about our darksides…

What’s your favourite dark tale? (Burton/Snickett/Grimm or beyond?) 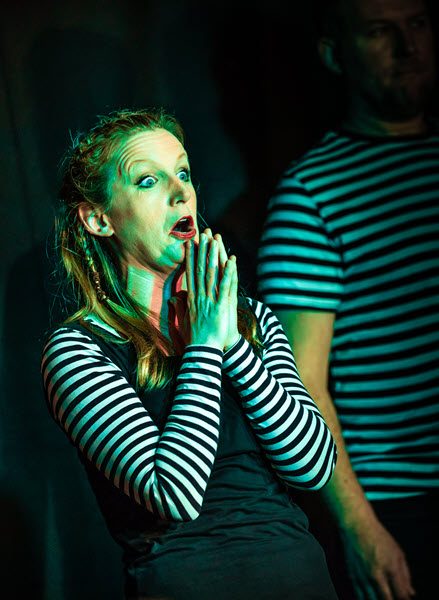 Heather – As a child I was obsessed with the story of the Tinderbox and still remember the description of the monstrous dogs with eyes the size of teacups, water wheels and round towers. As an adult I love the dark stories of Patrick Süskind. His famous novel is ‘Perfume’ but his little known novella ‘The Pigeon’ is so creepy.

Katy – I used to watch Jim Henson’s The Storyteller with John Hurt when I was a child. My favourite episode was The Soldier and Death

Liz – It’s not Burton but a fantastical tale I love is Flat Stanley. The story of a boy who gets squashed by a wardrobe and and then becomes flat. So he can slip under doorways and get posted round the world. Amazing!

Lloydie – I used to love Fungus The Bogeyman as a kid. The idea of a bogeyman that lived underground and scared adults in the nighttime was peculiarly delightful as well as a little dark.

Jen – I saw Shock-Headed Peter (music by The Tiger Lillies) in the early 2000s – musical tales of misbehaving children. My particular favourite was the Snip-Snip man who cut off Conrad’s thumbs because he bit his fingernails. The accompanying song started ‘He was dead!’ Also Gashly-Crumb Tinies is a work of genius!

Joe – There is a Grimm’s story called ‘The Valiant Chatteemaker’ where a woman is being driven mad by the ‘perpetual dripping’ in her house after a storm.   A tiger hears the woman being driven mad by the perpetual dripping and thinks it must be some kind of monster to be feared by all. It strikes me only now that this is the same story as The Gruffalo which is of course another classic.

Jules – Favourite is hard, but I do love the Babadook. No spoilers, but it is not at all the film you expect and one of the few I have ever seen where I really thought about leaving the cinema.  I also have mention the gothic and supernatural elements in Shakespeare plays: Lear on the Heath, the witches in Macbeth, Prospero and Puck.

Rhi – The Worst Witch. I even had a Worst Witch themed 8th birthday party. Also The Addams Family and The Storyteller, which got me thinking about the perils of eternal life from a very young age. Struwwelpeter is also in there, but more as a traumatising memory.

What HNA characters do you love to play? 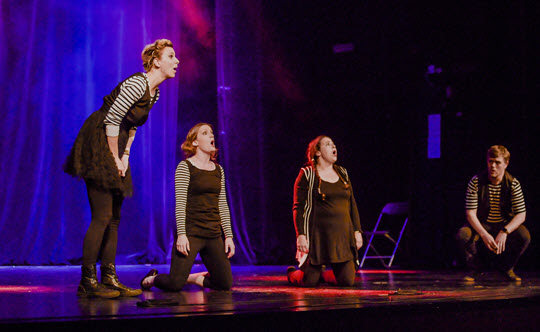 Heather – I am always happiest playing the naive characters, especially the total idiots who have literally no clue that anything at all strange is occurring. That and supernatural forces, in my mind I’m a green mist…

Lloydie – I really enjoy playing a baddie. A high-status, nasty character that get their comeuppance (which likely means getting killed). That’s always loads of fun.

Jen – Children, old people, evil sidekicks and weird ‘stuff’. There is much joy to be found in playing a benevolent chair or an evil carpet.

Joe – Well I can answer that from a musical point of view.  This show was born from the shows we did that would often take a dark turn.  I am sure that many of these were driven into dark places by the music that I would choose to play.  I do have a tendency for quiet, creepy and tense atmospheres when I am underscoring and I would often pick out the more sinister emotions to highlight when playing.  Once Happily Never After was created I just get to sit in that world and play that music the whole time!

Jules – I think the fascinating thing about the show is the license to emotional extremes in a morally ambiguous world. I love playing people who do the wrong thing for the right reason, and vice versa. Oh, and I love being a posh twit.

Rebecca – All of them. I often get nominated to do the chat with the audience at the opening of the show, which I do as a sort of extra weird version of myself and I really enjoy that!

What’s the darkest/most left of centre thing about life that fascinates you? 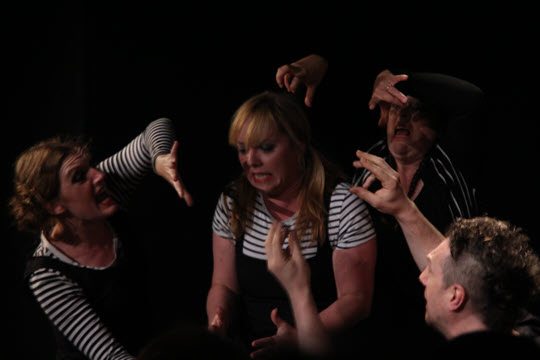 Heather – Spontaneous internal combustion fascinates the hell out of me. Even though it’s almost 100% guaranteed to be a hoax, I think it’s even more weird that someone would try and fake that by leaving a half burnt limb lying around. Also things that have teeth and hair that shouldn’t have teeth and hair.

Katy – I was in a Wiccan coven for three years. I’ve written a folk horror play called Let’s Summon Demons. I love the darkness…

Liz – If I ever see a dead creature I’m morbidly fascinated and want to look closely. The fact that something can once buzz with life and then suddenly be just a shell is so curious. Where does the life go? Which leads to the question ‘what is life?’ and then it starts getting deep…

Lloydie – I’ve always been fascinated by The Titanic. It’s a bit macabre being fascinated by such a huge tragedy but the scale of what that ship was at the time and the awful class divide when it came to lifeboat occupation is something that I keep coming back to

Jen – I think graveyards are endlessly fascinating, and there’s always something curiously exciting about a crypt with a crack in it. I saw the Savoca Mummies in Sicily once – you feel they could just get up at a moments notice.

Joe – Humour within tragedy.  Suppressed laughter at a funeral, the utterly inappropriate comments that pop into your head in the most serious situations.  This show allows us to actually go there!

Jules – Back when there was a prison at Newgate In London, it was said that the night before a hanging, the streets around the prison would be haunted by a black dog with the eyes of a man. It makes me shiver just to think about it.  And then my local pub is next to what is now the Imperial War Museum, but what used to be the Bedlam Hospital for the insane. The lovely sunny terrace on the top was built for rich people to stare over the wall at the poor mad folks within. And that’s where Heather and I have 2-4-1 veggie burgers on a Monday night. I love how London is full of stories like that, which sit halfway between history and legend.

Rebecca – I LOVE a good memento mori when we went to Rome on family holidays as a kid, my favourite thing was the Capuchin Crypt. Seriously, look it up….

Rhi – I am quite intrigued by anatomy. How muscles, bones and synapses all work together as a bio-robot and make our frames work. I am also terrified of death and therefore obsessed with it. I’m paranoid about getting gravely ill, and imagine dying must feel like the worst hangover ever followed by someone shouting ‘blackout!’

Catch The Maydays gang at Edinburgh Fringe from 31st July to 26th August, 2.45pm-3.45pm at Gilded Balloon Teviot, Bristo Place, Edinburgh. (NO SHOW on the 13th August.) ‘The Maydays have an impeccable pedigree’ – FringeGuru