Inside an Improv Festival

Our most recent scholarship winner, Rosanna Stevens, gives us a frank and first hand glimpse into the emotional, physical and psychological journey that an Improv Festival can take you on.  In the first part or a two part series, Rosanna talks about her first impressions and how she overcame her anxieties…

The Game of the Scene 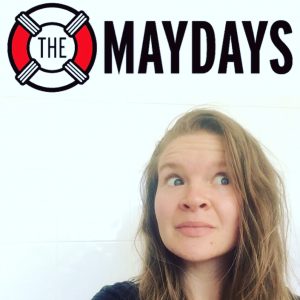 The Maydays taught me a word for the thing that happens when we start to feel a seed of doubt flourish into negative self-talk. It’s called a wobble. Wobbles are nauseating: they distort your faith in your abilities, and uproot your desire to try at things, for fear of being vulnerable to, well, more wobbles. I’ve come to think that a village of people can hold your hand, or write kind words, or offer perspective to help you understand your wobble, but only something powerful deep inside you can transform it into strength.

My life was one big wobble when I arrived at Osho Leela for The Maydays Spring Intensive Improv Festival. So when I stepped through the heavy red door of a Dorset countryside estate, I was relieved to discover that everything around me – the grassy wet fields, our colourful nametags, dinners clattering with conversation and cutlery, and the modest wooden beds waiting for their forty guests – seemed solid, quiet, friendly and kind.

Intensive kicked off, and I watched the talent around me open their bags of experience and use the tools inside to craft on-stage presence. An improviser called Rik delivered quick, funny lines with all the effort of blinking. Another improviser named Carey understood how to use a potion of timing and blunt emotion to create hilarious empathy between her character and her audience. They did it so innately. Everybody could see it. And so, I deduced, if everybody could see how skilled these improvisers were, everybody could also see that I repeatedly had no idea what I was doing, actually ever.

My self-talk grew acidic: all the internal notes I had stockpiled about how important it was to fail and live in relaxed vulnerability, dissolved. In class, I stopped stepping up to try things. Outside of class, I listened half-heartedly, didn’t ask people questions, and laughed less. It was day two. I was wobbling, my experience was being distracted by an internal scream, and it needed to stop.

On the second afternoon of the improv festival, I attended a class run by Jason Delplanque of The Maydays. In Jason’s workshop, two improvisers established a scene, and through their interaction, the rest of the class identified a moment or comment that could allow a challenge of some kind to emerge. Two improvisers got up and played lunch ladies who were on their tea break. They began to discuss the various ways they loved serving children their lunch, but also recreationally neglected their husbands. At that point, we interrupted the scene and named a game: these two women could try to out-horror each other’s methods of neglect, in stark contrast to their passion for service. The scene picked up again, but now the lunch ladies began to play the game we had identified. At the end of the workshop, everyone agreed that finding the game of a scene seemed to make things easier. It gave the people on stage a framework that helped players focus on the fun of a moment, rather than feeling the pressure of shaping something.

That’s what I needed, I decided. A game. A game would distract me from my wobble 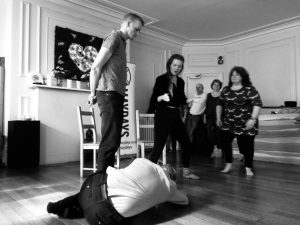 So I asked Jason what he thought the game of the intensive was. We were huddled against the frigid evening air, in a wooden garden hut called The Smoking Temple. It featured a meditation on the wall, a clock, and a large stovetop lighter chained to the building’s central post, which rattled like a Dickensian Christmas ghost – promising each cigarette lit would return to haunt us. He explained that we had converged upon Osho Leela from around the world, and so the game, he suggested, was to meet as many people as possible and use those new relationships to grow.

He was right: the game of community was sewn to the soul of our time at the intensive. Every morning everyone would warm up together. Each night, at the ring of a bell, our cohort ate dinner. On day one, we were each assigned a fellow improviser. If we ran into our buddy during the day, we were required to perform a secret handshake with them. Rumour has it The Maydays put a lot of time and effort into partnering everyone, and I believe it: my buddy Caryn was a confidante, a cheerleader, and a friend. But it didn’t matter how kind people were to me, or who I sat with at dinner, or what I debriefed Caryn about, something ate away at me – it didn’t seem like the game of community was the one I needed to play.

Share:
About The Author
Joe Samuel
Joe’s mother was a piano and he has spent his life trying to get back in. He is a classically trained pianist and violinist having studied at Royal Holloway University. He is the Musical Director of The Treason Show and of course The Maydays, and a teacher of most things musical such as piano, A-Level music technology, theory and gluing ivories back on with superglue.Along with Heather, Joe is the co-author of “Sing It”, a music improv book.
Latest Posts

Cancellation of The Maydays Improv Retreat 2020
23rd July 2020
We can do better: our next steps on diversity and inclusion
15th June 2020