Jason Chin Scholarships – Where are they now? 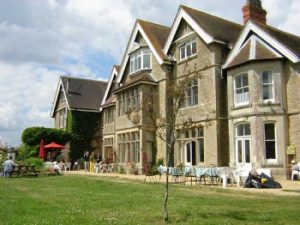 The Setting for The Maydays Improv Retreat and Intensive

The Maydays Improv Retreat is almost upon us and that means it’s almost the closing date to apply for the Jason Chin Scholarship. We started the Scholarship in 2015 so we thought it was about time we caught up with our previous scholars to see what they’ve been doing since.

Improv is a conduit through which we learn and change and grow together. It’s a path we walk in search of our better selves, as it prepares us to be a fixed point in an ever changing world. It allows us to bend without being broken , so that we might better care both for ourselves and those we support.

After winning the scholarship I took away a great deal from the Maydays retreat! Jules’s conversations on narrative and genre, plus Lloydie’s workshop on hardcore justification, were both particularly instrumental in the work I now do. I direct The Spontaneous Players, and our shows Spontaneous Sherlock and Spontaneous Potter. I can still feel the influence of Jules and Lloydie’s philosophies of playfulness and joyful pedantry in every performance!

In addition, the main energy throughout the Maydays retreat was always about following the fun above everything else. I unfailingly try to bring this energy to my solo freestyle rap comedy routines, under my rap name MC Hammersmith. Thank you Maydays for getting me out of my head and into the flow!

The scholarship gave me the inspiration and the confidence to push the pedal to metal in my shiny improvmobile.

In Spring 2017, I attempted to set up a bi-weekly workshop in Crawley which didn’t take off despite social media bombardment, posters, local news articles, letters, and telling everyone I know. Seems like Crawley isn’t ready yet!

With that on my mind I doubled my efforts with the Horley Dingbats workshops. In the last year and a half I have run a workshop every week (or organised cover in my absense). The weekly workshop average has doubled, I now run a well attended improv jam almost every month, and the sense of community around the classes and jams is building up nicely.

In 2017 I performed a week run at the Edinburgh Fringe with City Impro and many other shows throughout the year.

On top of that I’ve tried to drop-in to Maydays workshops when I can. I’ve done the Narrative course with Hoopla Steve and I am currently doing the Harold course with Maria. Now all I can think about it Harolds! Most importantly, I returned to Osho Lela the next year to do it all again and it was just as fun!

On a non-improv note, I packed in my shitty job I hated and got one that I really like! 🙂

In the time since my scholarship I have continued to study improv at the Nursery and with the iO and continue to perform with Rhymes Against Humanity and as part of Missimp: Nottingham. I also played a key role in an international film to commemorate the 1667 Raid on the Medway. In my normal life I have changed careers once to work more closely in the community (as a Postman) and again to be closer to my family after a number of years away.

– I started doing musical improv – joined a group with whom I perform in Romania, also got musical training from Sacha Hoedemaker who visited our theatre last winter, aaand I’m taking care of the fear of my voice by doing singing lessons;

– I joined the Recul team (Recul is the only improv theatre in Romania). We’re still on a break with the theatre because we’re looking for the perfect space (we needed to grow from the place where we’ve been in the past two years because every show was sold out and the demand was increasing) but we managed an Indiegogo campaign that was more than 100% funded and with this financial help we’ll soon start a new journey (we were backed by lovely people from all around the world, also from you lovely Maydays and from people I met at the Maydays Retreat last year);

– I started to teach improv and I’m in love with it!!! I’m teaching longform in Recul School (our theatre’s “academic” side – where we have a curriculum based on five levels of classes);

– Me and my improv group called All In, we’re experimenting with new formats, we discovered one very realistic format about family dynamics.

I think this sums it up…and a lot of it has to do with the retreat. Last year for me was a discovery year and everyone I met and every experience I had with improvisation made me realise that this is more than a hobby and this is the thing that I want to do. Playing, teaching, exploring, organising.

Since completing the Jason Chin Scholarship in April 2018, Rosanna has filmed her sketch writing with Chicago’s Tasty Snerks Co. In June, she finished teaching her first improv course with Impro ACT, where she shared many of the exercises and lessons gained during the Maydays Spring Intensive. Rosie is now playing and studying with Canberra’s Lightbulb Improv, and will be appearing in the 2018 improv festival, Canberra Unscripted this August. She is currently working on a few essays and pieces of humour, and a podcast episode for a San Francisco episodical.