Keeping Your Mind On The Job 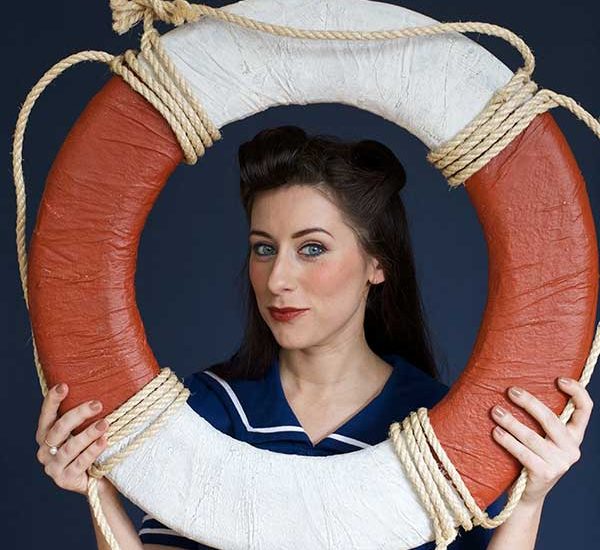 By Rhiannon Vivian
So I almost went, ‘Guys, Maydays. I can’t blog this time. I’m too snowed under with work. To the point I kind of want to cry. Big, square, juicy, sploshy, clench your jaw to keep them in, stress-tears. Tears of word-swimmery, brain fry-ery, thought fuckery and cognitive mash-ery. But also cheer, as it means cash of course. Cash. Fucked by cash. Shh. Dirty word. Well, it shouldn’t be really. It’s that and love that make the world go round, amiright?
So, the subject of my blog (typos and all – it’s all staying in so you can see just how fast I’m running – mentally that is) is what do you do when you’ve a ton on, but are definitely making time to rehearse and do shows. How, and where do you park your Serious Real Life Brain in order to release Very Necessary Stagey McImprov FunTime-Clown Brain?
The answer I’m afraid, is I don’t know (was that the disappointing sound of a much anticipated yet defunct party popper going pfft? Maybe.) However I do know this was my task last week. I was rehearsing with lovely Liz for two full half days for our show coming up, and it was imperative I put Other Brain into the cloakroom for £1, so I could focus on making stuff up.
It wasn’t easy. There is no trick. But as we went along it got better. But we couldn’t work out why the second rehearsal seemed to be clunking along in the style of two chafing tramp thighs. Then Jules said, ‘what did you do this morning?’ ‘Work,’ I said. ‘More than yesterday?’ he said. Yes. Ah…
We scrapped the scenes. We did a really physical warm up and were total DICKS for a good 15 minutes. We danced, we growled, we cartwheeled, we had a dance-off with Jules, we almost ran into thunderous rocket-style gas heater that warms The Nursery’s. We were DICKS on STICKS. We were Dicky McDickerson from Dumbass Bum Poo Wee Street. Then we stared at each other, we did word association and we did a bunch of utterly terrible shit-ass scenes. And then we did a set that flew like an endorphin soaked Sparrow on crack. Then we had some tea and biccies and felt rather warm and happy.
So, what have I learned and what have you learned? It’s hard to shut your brain up. But during the set that ‘flew,’ I can honestly say I thought of nothing but what was going on in the moment. It was like putting on brain blinkers. The ultimate in fun and active meditation, except not cross legged, and on a stage and laughing loads and saying sentences you’ve never, ever said before.
So, got loads of work on? Improvise. It’ll probably make your work better too. Like going for a run, or bunking school Ferris Bueller style, you’ll never regret having done it.
Share:
Latest Posts