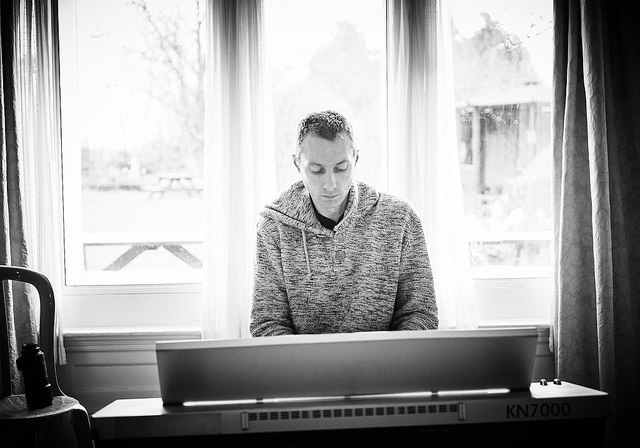 Like a petulant toddler, I have been dragged protesting and whining into the world of online Improv.  Initially as an attempt to replace my role in the once ‘real world’, and then as time went on and with a little more curiosity than resentment, as a way to explore something new different and potentially exciting.  My efforts have been far less thorough and dedicated than many others out there but I thought I would share my experiences with you nonetheless.  I may also add that I am aware that much better online platforms than Zoom exist that can potentially cut lag and actually enable musicians and singers to play together, however the vast majority of our output uses Zoom and so I am discussing the limitations and surprising discoveries made using it.

My first few attempts merely served to reinforce the idea that improv music should be live, in the room, and without lag.  After all – playing music together relies on subtle non verbal communication, precise rhythm and timing.  With some Maydays connected remotely, we tried to roll out some of the old classic short form music games, sing verses and choruses, and finally sing a round together.  It was a disaster, very funny, but a disaster.

I also played underscoring for some online shows and that, similarly served to highlight what was missing, rather than what we still had.  All my superpowers had gone.  I had no immediate visual connection with the players or the audience, no way of monitoring sound levels and no way of picking up on energy, subtle emotions or comic timing.  I felt like I could have put on a generic music bed and gone to make a cup of tea.

I left feeling despondent and reluctant to put myself out there again.  I should just wait until all this is over and get back in the room with people.  But there was something, a few things that intrigued me about the experience and that might be worth exploring some more.  So we gathered a group of willing experimental improv participants and we deliberately set out to push some boundaries and find what may be beyond the immediate limitations.

After three hours of experiments, failures and hilarity, here are the things I took from the session…

It takes a little brain reshuffling, but assuming the lag is consistent it actually just sounds like the singer has a quirky sense of rhythm, sometimes even producing a fresh rhythmic pattern that would not usually occur.  Obviously they are hearing themselves synced up with the keyboard, but I am hearing them a good half a second behind.  It was difficult to negotiate any swift changes or an ending but it certainly worked.

Counterpoint is the repetition of a phrase, or an answering phrase that is deliberately out of time with the original phrase.  Usually it would be timed nicely to fit with the rhythm of a song, but actually it can work with any strange timings.  Even with a whole bunch of people with different lags, if the main chorus leader stays with their idea, the various counterpoints provide quite a rich satisfying extra layer.

Taking it in turns works perfectly well.  We tried an old favourite of ours, “Hush little baby”.  Again, the lag was fairly consistent across the singers so I just assumed that they were coming in at the right time and if their voice did not appear when I expected I could vamp round the chords and cue them in again.  Curiously not unlike a group of under-confident beginners might behave.

Movement is such a natural part of performance and singing, but online it can freeze people in front of their camera.  Without movement our voices lock up and we can become self-critical and stuck.  Movement introduces that nonverbal communication back in so that even if the sound quality is too bad to hear, you can see when and sometimes even what the person is singing about.

I think the most important lesson I learned was that the technical issues provided another game to play.  What if you do all try to sing together?  How about singing a huge opening number to a musical?  Rounds, Chinese whispers, miming, anything else you may think of could provide at the very least some entertainment so long as you are not taking things too seriously.

In conclusion, although it can be frustrating, singing together online is at least a connection, some time spent singing and laughing is never a bad thing and I think we all left feeling uplifted and a little more connected.  It is clear that we cannot just replicate the old ways online, but we can explore this new world with curiosity and boldness and all come out of it with a shared sense of togetherness that is hard to find elsewhere.

Share:
About The Author
Joe Samuel
Joe is the Musical Director of The Maydays.  He is a classically trained pianist and violinist and is one of only a handful of professional improviser musicians in the world.  He has directed and played for a baffling array of improv troupes both in the UK and across Europe as well, as playing at IO in Chicago and being the musical director of Improv Festivals in Barcelona, Poland, Romania, Finland, The Netherlands, Dublin and of course at the Maydays own festival.
Latest Posts