My experience at The Maydays Improv Retreat 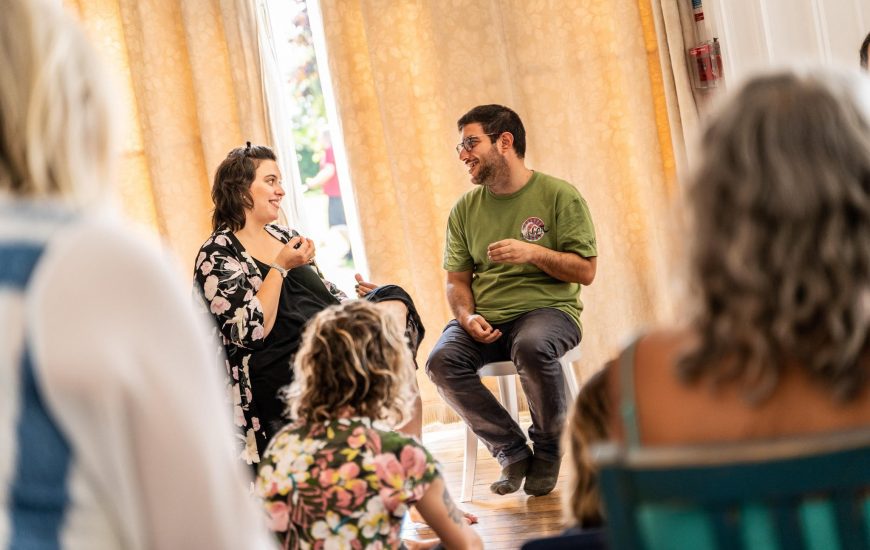 How can you describe something that is a feeling, that you cannot put into words, that is so unique that even the words you use to describe it are so paltry and trivial.

Many people wrote about the day-to-day during the Mayday’s retreat (here, here and here) so I will try to say what made that experience different for me. The thing that made it unique was, ultimately, the love and support I got from everyone during the retreat.

Let me explain: I was bullied a lot when I was a kid during school, so I grew up having little to no self-esteem. That carried on to my adult life, and there was always this little voice in my head saying “you ‘re not good enough” be it work, relationships or Improv. This voice got quieter by doing improv and getting better at it, but it never really left. I am very critical of me and others during an improv scene, and that has been a challenge I have been trying to overcome for a long time now.

And, without knowing for sure, I assume that many people have the same voice and that shows during an improv performance but also in the improv community. We are quick to judge ourselves and other harshly, not really adopting the improv mantra of supporting or making your partner look good. I have felt that by people, and I am sure I have treated others the same.

My time at the retreat taught me that love and support helps keep that little voice in check. Every workshop, every Mayday member, people taking the retreat helped. How can anyone (or you) doubt yourself when in every class amazing people and teachers like the Maydays tell you that you ‘ve done a good job? That you are enough? 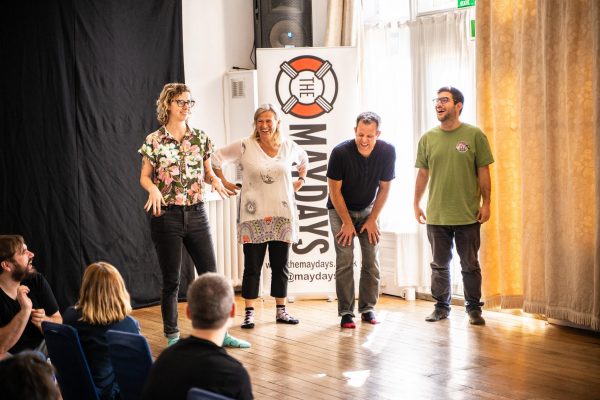 After each workshop (which were 1,5 hours long; I wanted more!) I felt joy and awe by being taught improv skills by all the amazing people that are the Maydays. I was doing a game of my own invention called Maydays bingo: I wanted to do at least one workshop with every Mayday. I would have won if only Ed Fargher did more workshops.

At the end of the retreat we all gathered in a circle (massive 60+ people circle) and we each said what was our favorite moment of the retreat. Someone mentioned me in a scene I was in as his favorite thing. A scene where I thought I hadn’t done much and doubting myself as usual. I was shocked. I started to cry my eyes out. I was enough, and I hadn’t felt that in a long time. I also felt sad and grateful. Sad because the retreat was ending and grateful to all the Maydays and the people who contributed in making the retreat such a special experience.

I want to say a big heartfelt thank you to the Maydays for giving me this amazing opportunity. If you are thinking about going, just do it: it might change your life for the better. And If it doesn’t you get to spend many hours improvising and being taught by some of the best improvisers around, so you can’t go wrong either way!

As for the little voice, I couldn’t hear it anymore, it was as speechless as I was. I’m sure it will come back eventually, but now I have the power to dismiss its claims.

Share:
About The Author
Joe Samuel
Joe is the Musical Director of The Maydays.  He is a classically trained pianist and violinist and is one of only a handful of professional improviser musicians in the world.  He has directed and played for a baffling array of improv troupes both in the UK and across Europe as well, as playing at IO in Chicago and being the musical director of Improv Festivals in Barcelona, Poland, Romania, Finland, The Netherlands, Dublin and of course at the Maydays own festival.
Latest Posts