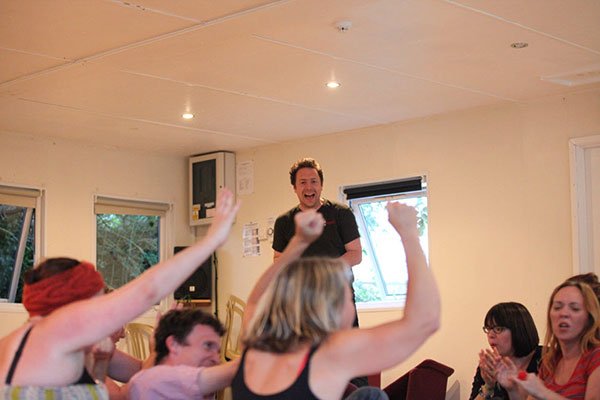 I have been slow to write this blog. In fact, I am the reason we failed to manage ten blogs in ten days. That was my fault. I have let down the internet and I am sorry. The truth is, I find writing blogs very hard. Words don’t trip out of me the way they do from some of the other Maydays. Plus, I love the whole of the Osho Leela festival in general and loved this year in particular and when you really love something it’s hard to encapsulate what you love in a mere few hundred words. Especially when writing isn’t really your thing.
The deal was that we write about our favourite class, and I found that I could not decide which class to write about. When the time came that I really had to write this blog before Joe killed me stone dead, I thought again about the classes I had seen, led and taken part in and there was so much to choose from. I had watched someone entirely new to improvisation beautifully portray the grief of mother who has lost their child, I saw a group of brain-fried three-day-in improv-addicts surrender themselves to movement improvisation and create stage pictures of astonishing beauty, I winced at mimed torture and guffawed over and over again at the plain dumb and the dazzlingly sophisticated. I had seen and loved so much that to write about one would feel like betraying all the others.
I thought about it again and realised that for me Osho is not about the individual classes, much though they are fun, but about the strange combinations of classes that people take and the equally strange combination of people in each group. Each student creates their own pathway through the festival, and that means each class is refreshed by new combinations of people and the influences of the classes they have taken. Who has been doing longform and deconstruction, who has been taking a character, who has been singing? In ways you could not fully understand, all of it feeds into everything else.
And that’s why I love Osho. The timetable is chaotic, fragmented, impossible to keep in your head. The content of two classes might seem as far from each other as one could possibly imagine, but each class feeds into the next, each skill gained or boundary tested is something that can be taken onto the next class. Being at the festival has a glorious feeling of being lost in improvisation, swimming and struggling, bouncing to the surface for a bit, then drifting under, half drowning before spluttering back above the surface. Eventually, you claw yourself back onto the shore of real life on the Sunday, tired and achy, but invigorated. You don’t really know what happened, but you can’t wait to dive in again.
Jules Munns
Share:
About The Author
Jules Munns
Jules Munns started improvising at the Guildhall School where he was a founder member of the Improsarios. After graduating, he co-founded the Nursery, where he is now Artistic Director. He performed with Music Box (5* FringeGuru and Remote Goat) and Friendly Fire before joining the Maydays in 2012. He directed the first run of Impromptu Shakespeare (5* Broadway Baby and Playstosee), which he now performs in and is one half of Ten Thousand Million Love Stories and Sitting in a Tin Can. He has performed and taught at festivals across the UK and in countries including the US, Pakistan, Canada, Germany, Ireland, Italy, Portugal and Finland. He also runs the Nursery blog and podcast and is working on a book on improvisation.
Related Posts
Latest Posts