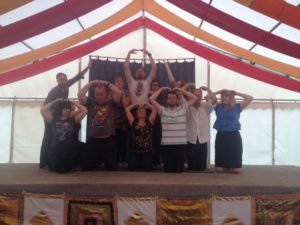 Creating improv with one other person is pretty cool. As you increase the number of people involved the stakes certainly become higher. The risks of a big group scene going wrong if you don’t work on group skills is high, but when it clicks it is a truly beautiful and breathtaking experience for both those involved and those watching. The show I personally enjoyed performing in most at Osho was The Last 10 Years where the full Mayday contingent created scene-scapes, organic flowing pieces moving from one scene to another turning a death into a birth, becoming the living sea complete with Poseidon and sea creatures, and rather notably becoming a bottom hole swallowing somebody up into what then became various inside parts. It felt like we were one big piece of silly putty able to stretch ourselves into anything and simply just knowing which cog each of us should next become in the machine.
In the Togetherness workshop, which I taught together with Jenny Rowe, we explored various facets of working together to tip the odds in favour of creating genius rather than generic.  Synching physically certainly helps. Clasping hands and sending a pulse round, breathing together. The awkwardness fades as the collective interest in getting the pulse to feel like a heartbeat grows. Listening must be absolute. Twelve initiations creates a cacophony, but noticing a tiny almost insignificant move and heightening it means you create extraordinary effects.
We also used an exercise where each person will at some point ‘faint’ during a neutral group milling about situation. The others must catch them and return them to standing. If you make the listening consequences as important as someone not falling flat on their back on the floor at speed, suddenly everyone starts listening very carefully. Something that seems impossible and nearly dangerous at the start can soon be ramped up until even more than one person can faint at once.
We explored walking together as a group, stopping, clapping and doing Elvis style pelvic thrusts together at the same time with no signals given. Peripheral vision becomes more acute. Those who tend to lead and those who tend to follow explored trying the alternative. The group develops cohesion and feels the group mind start to exist.
With two contrasting exercises, we pushed further into the silent and very quick, almost instant, negotiation the group must have in picking up offers and following them together.
The first asks the group to form beautiful still stage pictures using their bodies (playing with different levels, diagonals, symmetry and asymmetry) but forming them in only a few seconds. The results are then titled. Here the concept of ‘find a friend’ is paramount. If someone makes a bold move, join them to create symmetry, or support them by creating a counterpoint. A body on the floor becomes more interesting with a crowd standing weeping over it. A flock of birds is more effective than one. One wheel can become a chariot if someone becomes the other wheel quick enough. 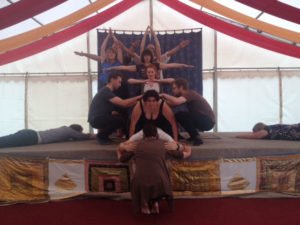 The second exercise asked the group to create all the people to be found in a given place (e.g. a submarine) finding a friend here no longer works so well – you only have one captain. So the negotiation is around fleshing out the detail together with no repetition, and the expected bases being covered. The audience then name what who the different people are and their roles, and the scene begins with dialogue being passed between the different characters evenly. Adaptation to the audience’s take on who people are portraying, and a sense of passing the ball with the dialogue are muscles that are strengthened here and notably the person the audience made the most senior tended to navigate the even passing of the dialogue.

Lastly we changed tack a little towards point of view. So often group scenes are messy and directionless and chaotic. Reducing the point of view to two (as if it were a two person scene) allows game to be played. We did press conferencing (one person is a company rep trying to do a product launch, everyone else is a journalist from a different paper). As soon as one of the journalists asks a stupid question about something they have misunderstood about the product, then the game of the scene is set. The job of the journalists is then to see how far they can push this one misunderstanding in different ways. The poor company rep has to just keep fielding the questions and getting more and more frustrated. Here one person represents one point of view, and everyone else the other – and it’s also a reasonable vs unreasonable game scene.

My parting thought on this that it’s really so worth spending time working on group scenes, however odd it feels doing some of the group exercises, however worthy of a terrible Drama GCSE class or Private Eye’s Pseud’s Corner any of this sounds, the results in a show can be astonishing and spectacular. If you have a palette of colours it seems strange not to use them all, and so if you are a team of three or more, making some of your scenes good group scenes will allow you to do things you simply can’t with the classic two person scene.

Share:
About The Author
Rebecca McMillan
Rebecca is one of our founding members and taught the very first Maydays beginners course. She has trained at iO Chicago. As well as the Maydays she performs with Impromptu Shakespeare & The Improvised Adventures of Sherlock Holmes, and in the past has graced the stage with Mothers Uncorked, BiteSize, The Treason Show, Voodoo Vaudeville & Fluxx. Combining improv with her degree in Latin & Ancient History, she worked for 6 years as an historical interpreter (improvising in costume as characters from history) with leading interpretation company Past Pleasures. Now based in Gloucestershire she coaches several teams and teaches courses and workshops in the South West and Midlands.
Related Posts