So it’s the afternoon after the lunchtime after the morning after the night before and we’re one show down. A good show with a lot of promising moments. The songs were great and here’s a fabulous example of one where big sister, Rebecca, thinks everything she has should be bigger than what little sister, Katy has… 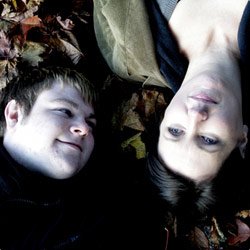 Fragility Of X – Underbelly 16:10
Our guest was Annie Fitzmaurice, coming to us from superb theatrical tradegy, The Fragility Of X, and she was superb. I’m sure she felt very nervous speaking to a room full of strangers about her “mad” father, her religious mother and her inability to think of a single sin worth talking about when it came to her bi-weekly confessions, but she provided us with just the right level of emotion and reality to make the show a success. It’s so nice to have people come up to us in the street to say that they saw the show and really liked it which has happened a lot today, even though we were half full last night.

I think it’s fair to say we’re all ready for a month up here in the not-as-rainy-as-we-were-all-expecting-touch-wood Edinburgh City. There was tangible excitement in the moments leading up to the intro to Who Are You? by The Who which kicks off our show every night. and the energy at which we started was excellent. I hope we can maintain it with the nightly 3am discussions in what drinks were invented by monks and whether said drinks should be boycotted or quaffed aplenty to which the final moral was decided: don’t drink monk juice. And neither will we!

We also received a splendid preview from Chris Hislop of FringeReview.co.uk which read as follows…

Improv, like stand-up comedy, is one of those art forms where the truly talented stand a full head and shoulders above the purely amateur: the Maydays are 100% the former. Where other improv troupes seem to rely on tired schticks, old characters rehashed and each others’ ability to outdo each other in terms of ‘wackiness’, the Maydays rely more on their ability to improvise effectively, creating interesting and rounded characters that it’s hard to believe were created on the spot. No one works harder than this troupe at refining their art and improving their ability, and this commitment and time spent together makes them the best improv to see at the Fringe, bar none.

As if that wasn’t enough, their show this year is also an exciting concept: improv with guest stars. In other troupe’s hands this kind of thing could spell disaster, but if anyone has the talent to pull it off, it’s these guys. With some exciting names already advertised, including Laura Mugridge, Tiernan Douieb and Terry Saunders, I can’t wait to see which other stars they pull out of the bag! Stay tuned for more info about guest stars on their website, and be sure not to miss this high-quality improv!

Heather and katy were practically moved to tears to hear such positive reaction to the work we do and I for one and very greatful to Mr Hislop for his words. They will more than likely bring many audients to watch us work and with a bit of luck they will all leave with a similar impression. A bottle of monk juice is on its way!