The Showstoppers, persistence and when my mum tried improv by Jules Munns 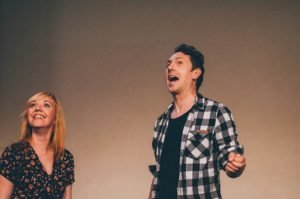 My mum came to the Maydays Improvisation Retreat this year. She had never done improvisation before, but thought it looked fun from seeing a few gigs I was in. There is no improv community in Whitstable, where she lives, so it seemed a good way to get to try it out. Four and half solid days of improvisation. In at the deep end.

The first night, she was understandably very nervous. When you arrive at the Osho Leela community, everybody seems to know each other and is happily hugging and chatting away, making teas at the tea station and singing songs from previous years. I think every newcomer feels like they are the only one who doesn’t know everyone. Follow it up with some big, loud group warm ups and more than one person over the years has thought about going home before taking a single class. As far as I know, no one has, but it can be an intimidating environment to come in to.

By lunchtime on the first day of classes though, she was having a great time. Three hours of improv training in, she had already tried improvised singing and knew the difference between longform and shortform. She had found a couple of friends to go through the classes with and was smiling ear to ear, telling me about all the exercises and games and how liberating it felt.

On the second day, she even came to a couple classes I was running. One was called ‘Brain Overload’, in which I get people to remember the joy of failure by playing all the games I know which are basically impossible, adding extra rules to make them even harder. The rule of the class was, each time a game fell apart, people were to throw their hands up in the air and shout (not say, SHOUT) ‘WE FUCKED UP!’. More than one person ended a giggling wreck on the floor.

Fast forward to the first weekend of the new Nursery season, and I’m standing outside the Edric theatre building with Heather Urquhart, a few minutes before the start of Ten Thousand Million Love Stories. Heather is a brilliant improviser and I trust her as much as I do anyone onstage, but the two of us were panicking. There was a full house, including a load of improvisers we really respect and many of them had never seen the show before. I had been producing and organising the season all week and wasn’t convinced I could easily shift to artist-brain and make things up. We were convinced this would be the worst gig of our lives. My mum had come up to see the show and, being my mum, remembered exactly what we had been talking about the week before, threw her hands up in the air and said ‘WE FUCKED UP! Isn’t that how it works?’. And of course she was right. The whole point of the class I had been teaching was that you can fuck up as many times as you like, it doesn’t matter, because you come back and you try again.

I don’t think we fucked up. I think it was a pretty good show. You can watch it here and judge for yourself. But the lovely thing about improvisation as an artform and a way of thinking is that even if we had fallen on our asses, burbled incoherently and then left the stage, that would have just been that gig. There would be the next gig, and then the one after. Because the process is the product, we are never done with it. And that liberty is what makes the process work. Things go better and worse, but they are already in the past and the beauty of improv is that we get to do it all again!

I first saw the Showstoppers doing a short set as part of a Theatresports cup organised by the Spontaneity Shop, I think in 2009. They did maybe ten minutes and it blew me away. Having done some musical improvisation myself, I now know that improvising a song is not the miracle it initially looks. It is a difficult skill, and it takes work to get there, but it is a learnable skill. There is no quick route to it, you have to rehearse, week in, week out (as they do), do gig after gig after gig and be honest and direct in how you learn from what you have done. The Showstoppers are not an overnight success, they are an earnt one, and they are all the more inspiring for it.

In getting to where they are today, the Showstoppers are both an example to the rest of the community and a reminder of what improvisation is so brilliant at. They have taken nothing for granted and through dedication and hard work, got more five star reviews than I can believe, built a show and a brand that people return to again and again, broken conceptions of what is possible with improvisation and got to the West End. I can’t wait to see the show, probably a few times.

My mum made a bunch of great friends that week, from all over, and she is already planning how to get to the Maydays Brighton drop in, perhaps even popping up to London to visit the Nursery.
We are one weekend in at the Edric. We got some things very right and a few things wrong. This weekend we will do better, then we will do better again. And I know the Showstoppers will not be resting on their laurels. They will be analysing and rehearsing and improving. It’s never finished, there’s always more to do and that’s what is so frustrating, inspiring and addictive.

Share:
About The Author
Jules Munns
Jules Munns started improvising at the Guildhall School where he was a founder member of the Improsarios. After graduating, he co-founded the Nursery, where he is now Artistic Director. He performed with Music Box (5* FringeGuru and Remote Goat) and Friendly Fire before joining the Maydays in 2012. He directed the first run of Impromptu Shakespeare (5* Broadway Baby and Playstosee), which he now performs in and is one half of Ten Thousand Million Love Stories and Sitting in a Tin Can. He has performed and taught at festivals across the UK and in countries including the US, Pakistan, Canada, Germany, Ireland, Italy, Portugal and Finland. He also runs the Nursery blog and podcast and is working on a book on improvisation.
Related Posts