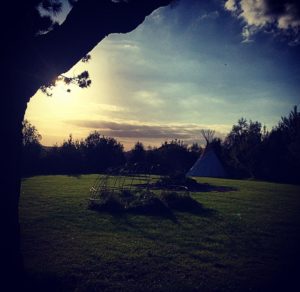 I’m always overwhelmed by how brave everyone is when I teach at the Maydays improv retreat. How willing everyone is to stand up in a room full of people they don’t necessarily know and just give anything a go.

Every single one of my classes this year surprised me in the best way. In particular with the spontaneous and inspired lines that came out of their mouths. In improv, some of the best and most brilliant dialogue is crafted in the moment on the spot, in a way you’d just never get if you sat down to methodically write how a human talks and responds. Improv provides a fertile ground where wonderful observations, unique phraseology and just beautiful use of rich and diverse language can naturally flourish – probably because people are not blocking themselves or judging what comes out of their mouths. And all my classes just nailed it. It just makes me love this art form more and more every day. And I love how the students, despite being the authors of the words they’re speaking end up surprising not just us, but themselves too. If you do a lot of improv, the chances are you’ll become a damn good writer and editor. That’s a pretty amazing by product.

I wanted to give a particular nod in this blog however to my music class this year. We got stuck into dream songs – the classic solo number that a hero or protagonist sings at the beginning of a narrative musical story, which neatly articulates what they want or are longing for, in order to change the status-quo of their life (think Cinderella). The main thing that drives a dream song is raw emotion, which comes from a selfless want that’s always bigger than the protagonist in question. With that, these songs can really fly.

There was a bit of a magical element to the class right from the start, as Joe and I decided to start a soundscape (no words, just oohs, aahs and hums – and the piano of course) firstly with just us two, and then (we hoped) gradually everyone else, growing the sound as people filtered into class. We didn’t instruct them to join in, they just did. Just as planned! The result was a goose pimple, hairs up on the back of the neck moment as the sound reached a gorgeous crescendo. With no one leading anything, our beautiful improvised choir had created a spontaneous piece of music.

Then came the dream songs. It was really lovely to see everyone in the class get a turn to be the ‘hero’ and have a go at a dream song. With four people per scene, anyone not acting as the protagonist had a simple job – support the hell out of the protagonist. And the results were astonishing. Right from the off, we had some incredible stage pictures created by great collaboration and some truly stand out, spine tingling lyrics, including the line, ‘I may be old, but I’m still real’ from an old lady character who just wanted to stop being invisible. We even had a dream song entirely in French. Other beautiful moments included a put upon captain of a ship who just wanted respect, the bullied lady who longed for everyone to be considered beautiful by just being themselves and a shared moment of longed-for freedom between a lion and circus performer. Just writing about them all is giving me goose pimples.