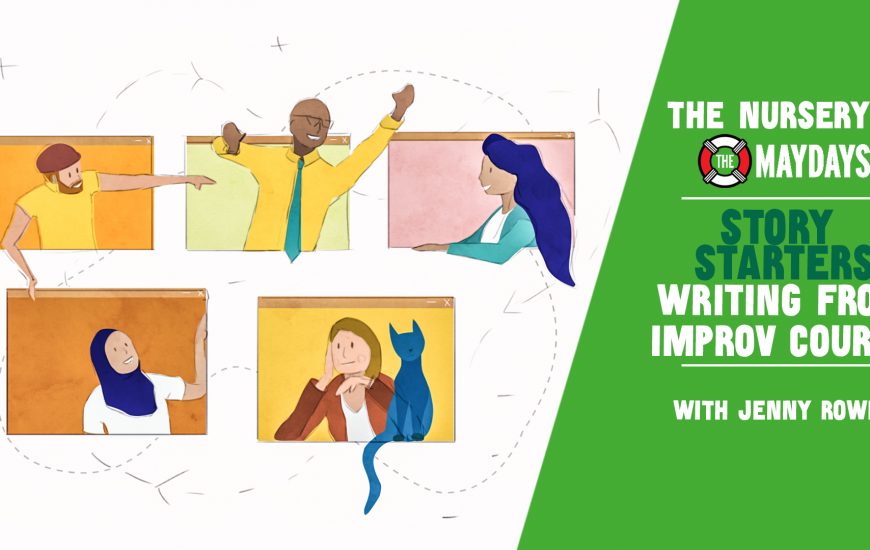 Katy Schutte once created a deliciously gross character called Margaret, who lived at the bottom of the schoolyard and gave weird advice to children. I think we all understood her to be dead (after all, it was from the darkly gothic Happily Never After). Anyway, Margaret was a fleeting role and the show continued largely without her. Nevertheless, I couldn’t get her out of my head – she reminded me of one of the Gashleycrumb Tinies (see link https://edwardgoreyhouse.org/pages/edward-gorey-gashlycrumb-tinies), and I wanted to know more about her. But once we’d done the performance, Margaret was gone and that was that. So I started writing about her; filling in her past and establishing other characters in the gaps. I was inspired to put her in a new story of my own making. (I also checked-in with Katy because, although I’d written a lot of new words, Margaret was originally her creation.)

This isn’t the first time I’ve been inspired to write something from an improvisation, and I’m sure it won’t be the last. There’s a 90%-finished story on my desktop inspired by a scene I saw Joe Bill and Patti Styles do in the 2017 Athens Improv Festival. In that instance I’ve changed many of the details, but I did use the atmosphere that they created as a starting point (it was a moment of improv magic, if you didn’t see it). And there are other pieces – plays, monologues – all inspired from watching or collaborating in improvisation*.

Many actors and playwrights start the creation of their shows with some bodies in a room and just a seed of an idea. The workshopping happens collaboratively, and then the writer goes off to hone those ideas into words on a page. So if that happens with plays, why can’t it happen with novels and short fiction? Why must the novelist sit alone in their room agonising over their protagonist’s ‘wants’? Why must the short fiction writer sit in front of a blank page, pen-poised? Can’t there be other, more active – potentially more collaborative, ways to write?

Does it have to be:

In every writing class I’d ever taken, we were encouraged to build strong characters, strong relationships, to consider plot points, to heighten the stakes, and the clincher – lose the editor in your head. In fact, my favourite piece of writing advice is:

That’s improvisers, right? OK, not drunk – please don’t be a drunk improviser – but one thing we’re encouraged to do when we start out is to embrace the unknown; to dive in first and then work out what’s going on, and to ignore the judging voice in your head that says, ‘don’t even try, this is going to be terrible.’ Improvisers are, in a way, writers, it’s just the stage is our page and our stories are swept off it at the end of the night.

Haven’t you ever been in a scene – a whole show, even – where you’d wished you could write it down and keep it?  Of course, the beauty of improv is that it’s ephemeral** (unless you video it); an enchanting, funny or moving moment of collaboration experienced only by those present on the day. But it doesn’t have to lose its value when it ends. A show is never really gone completely (which can be unfortunate if you hated it – everyone remembers their terrible shows). A one-off show continues to exist in the catchy song that’s sung out of the auditorium, or the anecdotes passed on to friends and family the next day. So why not take it a step further and use it a starting point, to expand on the bits we loved?

This is why I started running classes using improv for writing. And I’m not talking about sketch in this instance. (Although, of course the building blocks for sketch comedy are very much connected to improv comedy – just look at Secondcity). I’m talking about fiction, plays, poetry, flash fiction, character monologues, prosepoems, novels, and, yes, screenwriting and plays too…

*I would always advise checking in with people if you have doubts about whether an idea or character is fair game to write about. Besides, it’s just polite.

**Did I say improv was ephemeral? Yeah, but it turns out you can see that fabled Joe and Patti scene here. https://www.youtube.com/watch?v=5u6u-XJyhnY

Share:
About The Author
Jenny Rowe
Jen trained at ACT Brighton and now teaches there on a regular basis. Her credits includedreamthinkspeak (Underground) and Fringe-first nominated Bite-size Plays. She has toured withThe Foundry Group and played Ero in The Widow’s Tears for the Shakespeare’s Globe ‘Read Not Dead’ series. She is an actor, voiceover artist, writer and teacher, having worked with the BAFTA nominated Treason Show Productions and can be seen as a hula-hooping, crash-helmet-wearing starlet walkabout act for Twisted Dreams at various festivals.
1 Comment