To dream the impossible dream 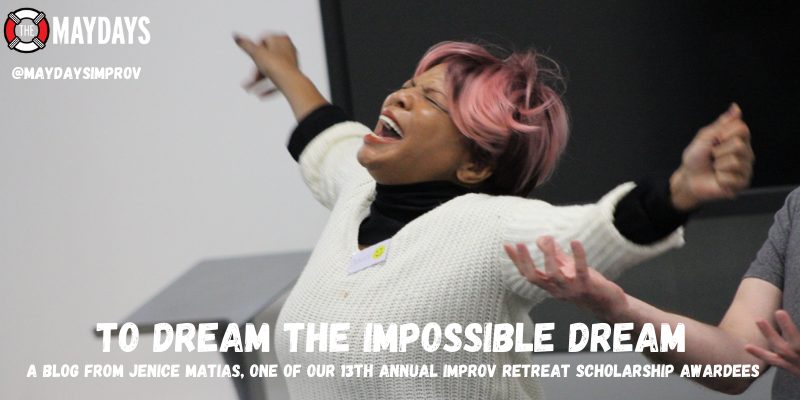 A blog from Jenice Matias, one of our 13th Annual Improv Retreat scholarship awardees

It’s been some time since I  returned to New Jersey from the Maydays retreat. Time has not dulled my senses because I am still in a state of euphoria. My memories of the retreat loom in my mind, like a child recounting her first visit to Disney World.  I can still sense the electrical sparks I felt when I walked into the Ashorne Hill lounge. The smell of new mixed with old dancing in the air. Its decore transported me back to the Sherlock Holmes and Harry Potter books I loved to read.  The echo of bustling improvisers through the Ashorne Hill corridors buzzes in my head.   My heart still beats fast whenever I recall the insightful innovative improv classes I studied. But most of all,  I enjoyed the nightly performances by The Maydays.  Their performances were like a five-course meal for the senses.  Each moment filled me with awe and excitement.  My time at the retreat challenged my creativity and ignited my imagination. When I returned to the USA I had lost my self-doubt and transformed into a mindful fearless improviser.

2020 tested my sense of humanity. My full-time job as a teacher was put on hold and my part-time job as an EMT became full-time. I found myself on the front line of the pandemic, knowing I could become its statistic. I felt hopeless and powerless.   One day, during a google search, I discovered the Nursery and Maydays improv websites. The online “Open Jam” became my weekly haven.  I loved playing with a diverse cast of improvisers from all over the world.   The jam was a sobering relief from my sense of doom and a reality check from what was going on in the world.

When the Maydays and the Nursery implemented their diversity bursary it was like a gift from above.  I said to myself, now I can study improv as an academic and still have fun. I signed up for every Nursery and Maydays workshops allowed through the bursary. I found a new sense of purpose and commitment. The classes filled my mind with knowledge that fired up my soul.  I noticed I was becoming more mindful and reflective not only in my improv skills but also,  in my personal life.  As time passed I felt a sense of normalcy flow back into my life.

I have dreamed of studying acting and improv in  London since I was an undergraduate.   The Maydays Improv Retreat Jason Chin scholarship was the door to my dream.  I filled out the online scholarship form doubting I had a chance, as my inner child shouted “what did I have to lose”. After my application confirmation email, months went by as the scholarship application deadline approached,  I was about to call JetBlue to cancel my flight when my cell flashed with an email. I stopped breathing for a few seconds,  My impossible dream became a reality. 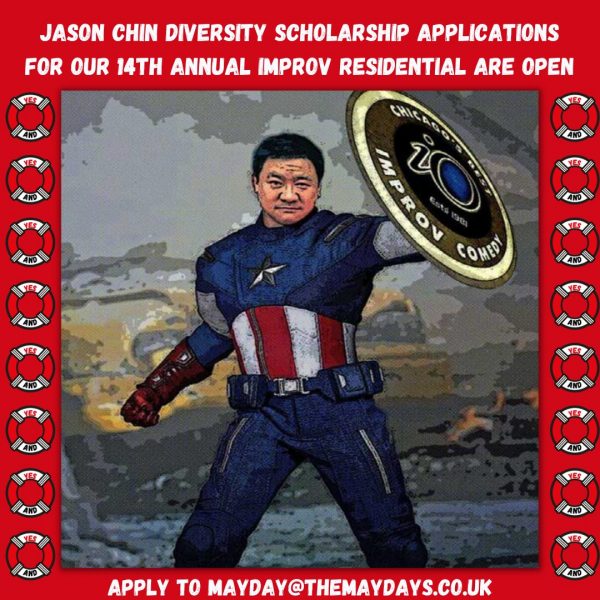 I am afraid of flying, but my love for improv was stronger. I boarded the plane at gate 333.   The flight from JFK to LHR was on time.  The plane departed at 10:09 pm. I was on the first JetBlue transatlantic flight to the UK.  I became overjoyed when I learned that I was the only passenger in my row. I felt like I was in first class.  I looked out the portal window. I became star struck, for the plane appeared like it was flying through an ocean of stars. The view of the moon seems to appear below the plane. It reminded me of the fable “the Cow jumped over the moon”. I felt like I was on the edge of outer space.

When I first arrived in London I was fearful that I would get lost and become a missing person.  But, through perseverance and talking to many Londoners, I  figured out the train routes.  I found the UK transportation system to be faster, cleaner, safer and cheaper than NY and NJ.  I was gonna miss that about London.

I arrived two days before the retreat in hopes of seeing a little London nightlife.  I never liked the idea of being a tourist, so I booked my stay at  Publove @ The Rose & Crown hostel.  It is popular with competing athletes, artists, and world adventurers. It was so exciting to share stories with people from far away places over a meal or drink. I met a cyclist from Poland whose mission is to travel the world on her bike, she had already completed 3/4 of her quest when we met, WOW!

London reminded me of the streets of Greenwich village of manhattan.  The only difference between them were the cars and buses.  I found it funny when people would say they liked my accent, a change from me saying it.  My online classmate Max, who was also attending the retreat, reached out to me in London. Max treated me to an evening of theatre magic by taking me to see the musical show  “Back to the Future”.  It was an evening of musical theatre magic. Max took me around London and even gave up his VIP train ticket to escort me to the retreat. I am so thankful for his chivalry.

I had been studying with the Maydays improv school for over a year online. So when fate had me in the same train car with four of the Maydays teachers it was a thunderbolt moment. After hand and elbow bumps we settled down into our seats and spent the time talking as if we were long-time friends.   The train ride took us through a  scenic view of manicured farm fields. with sheep, cows and horses grazing on them. It was a change from the busing sounds of cars and people in the city.  When we arrived at our train destination, we took a taxi (black cab) to the retreat.  When I arrived at the hall and checked in I found my room accommodation and privileges were beyond my expectations. I had my own suite accommodation, meals and all classes and shows. I was in improv heaven. 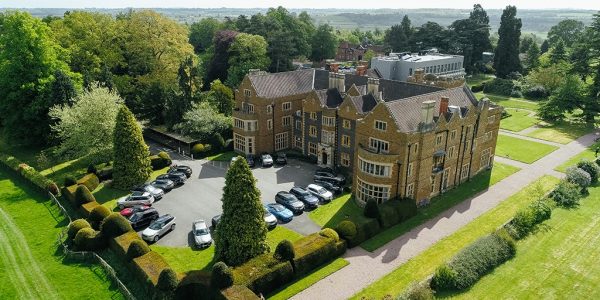 The retreat’s daily itinerary consisted of four, two-hour classes a day. I revelled in the innovative classes that were a testimony of improv being a living art form. The class size was kept small which allowed more time to explore, discover and play.

I loved meal time. It was the opportunity for teachers and students to mingle and converse. There was always a roar of laughter at the end of each meal, except for breakfast. Lol! 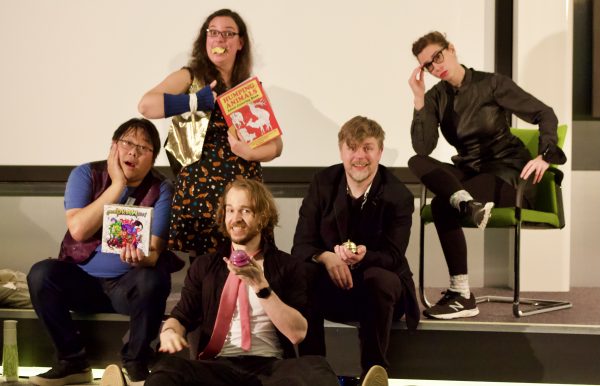 One of The Maydays performances from the 13th Annual Improv Retreat

Each night the Maydays troupe honoured us with their legendary improv performance. I asked one of the Maydays how they were able to make their improv appear scripted, the reply was  “ we been playing together for a long time.”

The retreat ended with a student showcase.  The students had the opportunity to perform an improv skill of their choice. I chose the musical genre called “The Diva”.  The genre requires the improviser to create a bigger-than-life musical character.  It was my friend Max’s idea to do a Star is Born moment. Max got several players to join us as backup singers. I took a deep breath and said yes to the improv.  I had my finest moment receiving a standing ovation.  I end this blog with my song lyrics: 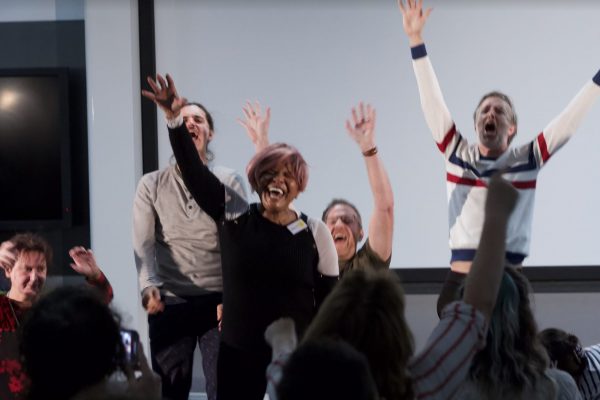 Say Yes To the Improv

So I was afraid that I could not compete

What’s our Retreat got in store for you this year, find out here. If you’d like to apply for the Jason Chin Diversity Scholarship for our 14th Annual Improv Retreat, we invite you to do so! Closing date 1st October 2022. Full info here.