Last year, I ran a couple of workshops at our residential called ‘Improv and Creative Writing’. It was partly based on my lamenting the fact that we create so much wonderful stuff in improv classes only to lose it forever, except for dim and distant memories. That, and the fact that I was struggling to write my own short stories yet forgetting to dip into the improv archive, in my own head, for inspiration.Now there’s nothing wrong with throwing away improv once you’ve ‘used it’, indeed there’s a lot to be said for just doing improv for the sake of it, then letting it go – a big improv balloon of ideas, floating up until it’s just a dot in the blue. But, then, wouldn’t it be nice, sometimes, if those balloons had your unique tag on them and they landed in another place, say for instance, on the desk of an editor, or competition judge or agent?

So that’s where I’m coming from: Writing INSPIRED BY improvised scenes.

No, I don’t mean writing, verbatim, a scene you did during a ‘New Choice’ or a ‘Henry’.

Not exactly Tolstoy is it?

Neither am I suggesting that you write sketches, Saturday Night Live style. You CAN write sketches, of course, and it would be brilliant if you did: many people study at Secondcity, in the US, to learn how to do just that. Improv is a brilliant way to learn the comedy building blocks of sketch and sitcom writing (for instance, set up, set up, twist, game of the scene or mapping – these improv regulars are used countless times in written comedy.)

All I’m suggesting, though, is that many a Writers Block can be shifted with a bit of improv. It doesn’t even have to be anything too terrifying, which means that anyone can do it. In my workshops, I started gently, with group games and story-telling. We began by simply playing ‘Machines’, then wrote for 5 mins about anything that struck us, anything that inspired us. It’s just like a brain storm (or is that a thought shower these days?), only a little bit more physical.

The Machines exercise, alone, inspired the participants to write stories, dialogue, poems, a play and even a song based on ‘a bit of pratting about’. Working in a group also helped; we were all under a little pressure to produce something AND to read it to the rest of the class. The sharing helped clarify thoughts and to inspire further writing through seeing how other people interpreted elements that came out of us playing.

Further scene work can deliver in-depth character studies, interesting or weird relationships and, yes, coming up with names; all very useful in writing, plotting and story structure. When we try to get rid of the voice that says ‘no’, ‘bad’ in an improv scene we’re in effect removing the editor in our head – the same editor that makes a writer stop every 30 seconds to review and improve on work that hasn’t yet been fully explored. And when we ask improvisers to start scenes ‘in the middle’ and to DO something rather than TALK about doing something, exactly the same ideas can be utilised in writing. They call it ‘showing not telling’ and it makes a piece of writing or piece of improv take a journey..

Since starting this chain of thought, through using improv to inspire my own writing, I have borrowed structures and formats, such as the Harold, I’ve brought home improvised characters and I’ve used ‘yes, and’ a hell of a lot.

So, just a thought; the next time you improvise, see what you can remember afterwards – what stands out for you – and jot some of it down. It doesn’t have to brilliant; it doesn’t even have to make sense (have you READ Finnegan’s Wake?) but in the long run, you might just win the Booker.

Or, just improvise and let it go – the sky is getting full of those balloons and what a brilliant sight it is. 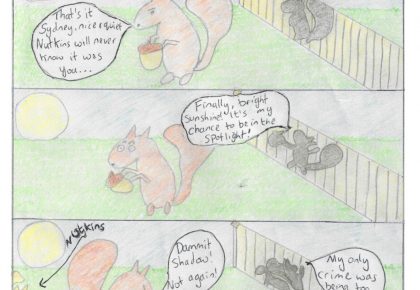 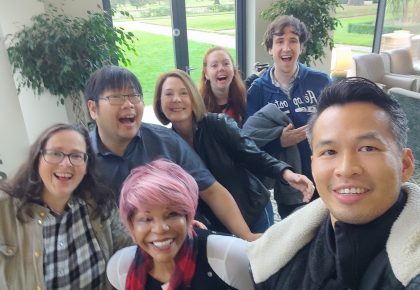