Improv classes and how to survive them: Being Funny 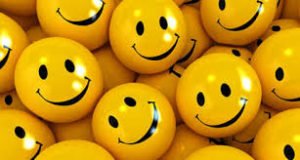 You’ve signed up to an improv class which is a COMEDY course, so you really should be extra funny by week two, shouldn’t you? But Janet got 4.5 times more laughs than you and Dave, well Dave might just as well book his ‘Live at the Apollo’ gig right now. You know what you need to do? Stop trying so hard.

When you start improvised comedy you might naturally be anxious about it. People choose to do improv classes for all sorts of reasons – confidence-building, work, presentation skills, purely for fun, even surprise birthday presents. Whatever the reason, after the first week or so, it is easy to perceive that (Oh, god, NO!) some people might be funnier than you. For some, being funny isn’t the main reason for wishing to take part, so the fact that someone gets more laughs might hold less importance but, for others, it’s a constant source of anxiety – certainly in those first few weeks (and, incidentally, once again when you start learning longform, but that’s another story).

The fact is everyone can and will be funny and the best laughs tend to come from people surprising themselves with something said ‘in the moment’ rather than from pushing a joke. We’re not trying to do stand-up, we’re training ourselves to look for patterns and games and to respond truthfully in a collaborative environment. Being funny is just a by-product of that.

We often see new improvisers grabbing at tried and tested jokes, clichés and one liners in an improv class. It’s a defence mechanism that they probably don’t even realise they’re doing. ‘Hey, I’m not going to be able to think of something funny here, but I already know that THIS comedy sketch from my memory is hilarious, and anyway, everyone’s staring at me‘. Give those people ‘parrot’ as inspiration and, subconsciously or not, you’re going to see some of ‘the Monty Python parrot sketch’. It’s fine, the parrot sketch is funny, but it’s not their own idea. And the audience will KNOW – they’ll know it wasn’t made up on the spot, they’ll sense that it’s been crowbarred in. It feels a little fraudulent, and the audience starts to mistrust that ANYTHING on stage is made up.

“But I can’t think of things quickly enough to be funny.” Think again. Yes, some clever folk (you know, the ones who read Satre at five years old and seem to know a degree level of information about the most obscure subjects) can come up with quick, witty wisecracks and hilarious philosophies with ease. You may think the Satre-toting child genius is thinking quickly (and perhaps they are) but often you’re just so involved in the dialogue you’re having with your brain before you speak, that your own response just FEELS slower (and you’ve been so wrapped up in what YOU’RE going to say that you haven’t been looking at the other guy anyway).

But you know what? It doesn’t MATTER if you DO respond slower, as long as you look like you’re involved in your scene – look at your scene partner, pretend to move some furniture, tut at them, whatever, but stay present and with them at all times – they’re relying on you.

Most people in an improv class just work really hard at listening and responding truthfully. That really is all there is to finding the funny. The building blocks of improvisation aren’t just yes, and…, they are listening, committing, collaboration, support, identifying patterns, exploring emotions, heightening, taking risks, and all the time your confidence is growing, growing, growing. As you LEARN each of these useful tools, they – the basics –  gradually become second nature. So, for now, just enjoy exploring those building blocks, look back at scenes and notice where people laugh, concentrate on enjoying playing with other people, appreciate the gift you’re giving yourself – of being truly present.

And funny? Funny will just come along for the ride.

Share:
About The Author
Jenny Rowe
Jen trained at ACT Brighton and now teaches there on a regular basis. Her credits includedreamthinkspeak (Underground) and Fringe-first nominated Bite-size Plays. She has toured withThe Foundry Group and played Ero in The Widow’s Tears for the Shakespeare’s Globe ‘Read Not Dead’ series. She is an actor, voiceover artist, writer and teacher, having worked with the BAFTA nominated Treason Show Productions and can be seen as a hula-hooping, crash-helmet-wearing starlet walkabout act for Twisted Dreams at various festivals.
Latest Posts